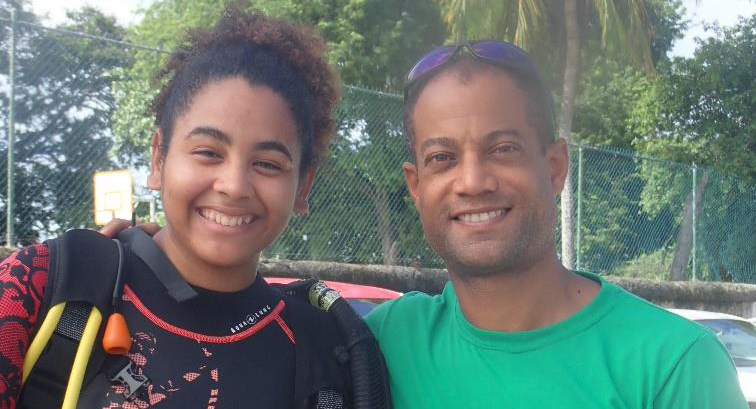 Jeniece Germain has been awarded the degree « of Master of Philosophy – Ecology » with High Commendation from the University of the West Indies in Barbados. The study entailed year-long monitoring of the population dynamics and distribution of E. evelynae and E. prochilos; two of the predominant cleaner gobies in the Caribbean. These little fish are vital to the structure and functioning of reef systems, as they aid in maintaining reef fish health across several trophic levels. The findings of this research project are currently being prepared for two publications.

Yet, the focus of many population studies on reef fish often included Pomacentridae (Damselfish) and Labridae (wrasse) and those on cleaner gobies often only spanned the summer months or several (alternating) months of the year. Thus, the study sought to fill this gap by producing the first high-frequency sampling, long-term monitoring of their populations. Also, upon preliminary observation of the study site (Carlisle Bay, Barbados), it was discovered that both species occupied both microhabitat types, which was a first in the literature. Thus, this also presented a unique opportunity to determine the mechanism of habitat partitioning, whether spatial, temporal or spatiotemporal habitat partitioning. 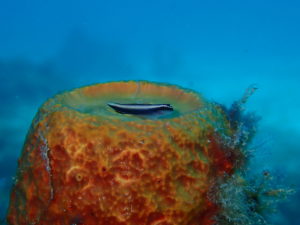 The results revealed that peak abundances of E. evelynae occurred from February to June and August through December, while E. prochilos showed one major peak from August through December. Still, their temporal dynamics were significantly correlated, indicating that temporal habitat partitioning was not an important factor in their coexistence. However, they exhibited different microhabitat use, as evelynae disproportionately occupied corals more than would be expected at random, despite significantly less coral area, and E. prochilos though 4x more abundant predominantly (~90%) inhabited sponges. This shows that both species likely co-occur due to spatial habitat partitioning.

The study also highlighted known and unknown processes in both species’ populations. Upon analysing the size class distribution of each species in coral and sponge, it was found that the average size of coral-dwelling E. prochilos was significantly smaller than sponge-dwelling conspecifics. This suggests the occurrence of an ontogenetic shift in microhabitat use from coral to sponge as E. prochilos grow. 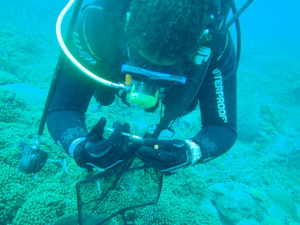 The spatiotemporal dynamics also yielded more interesting results, as the buffer effect was found to occur in E. evelynae, whereby E. evelynae begins to occupy sponges as its population increases, as corals likely become saturated. To suggest a buffer effect, there should be evidence of the varying quality of sites, higher relative changes in abundance (or density) in the poor-quality habitat and demographic costs (e.g. fitness) of inhabiting the poorer quality habitat. First, based on the disproportionate use of corals by E. evelynae, and the literature on its microhabitat use in the southern Caribbean, it is likely that the preferred microhabitat for the species is coral.  Second, E. evelynae. exhibited significantly higher variation (relative change in population) across the four population metrics – overall density, experienced density, proportion of microhabitat units occupied and proportion of population in microhabitat – suggesting that its population on sponges was more unstable than that on corals. This also means that the coral-dwelling population was more stable and that corals were often saturated, inhibiting preventing further increases in population. This further indicated that coral was the good quality habitat for E. evelynae. Additionally, overlap analysis revealed that overlap values were greater than expected by chance only when E. evelynae abundance increased on sponges, which supports the shift in microhabitat use as its abundances increases. Third, significantly larger proportions of the largest gobies (>30mm) i.e. the longest living adults (proxy for survivorship (demographic costs)), occurred on coral. Thus, these support the conclusion of the buffer effect in E. evelynae. 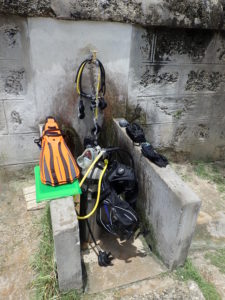 Sponges are likely to be the preferred microhabitat for E. prochilos in Barbados, as sponge-dwelling E. prochilos populations were more stable (lower variation across the four population metrics), and a significantly larger proportion of the longest living adults (>30mm) occurred on sponge. Furthermore, our findings also suggest that E. prochilos may exhibit conspecific attraction, as the strength of the disproportionate use of sponges is positively correlated with E. prochilos abundances.

The thesis required no corrections and the university offered the upgrade to PhD. However, my supervisor would be going on sabbatical, and other suitable lecturers were unavailable. Nevertheless, I am very happy with the work and completing the degree, and I am grateful to the Caribaea Initiative to have had this experience. I officially graduated on June 12th 2020 with High Commendation, and the findings of the thesis are currently being prepared for two publications.