Reptiles: success for the first field mission for the MERCI project 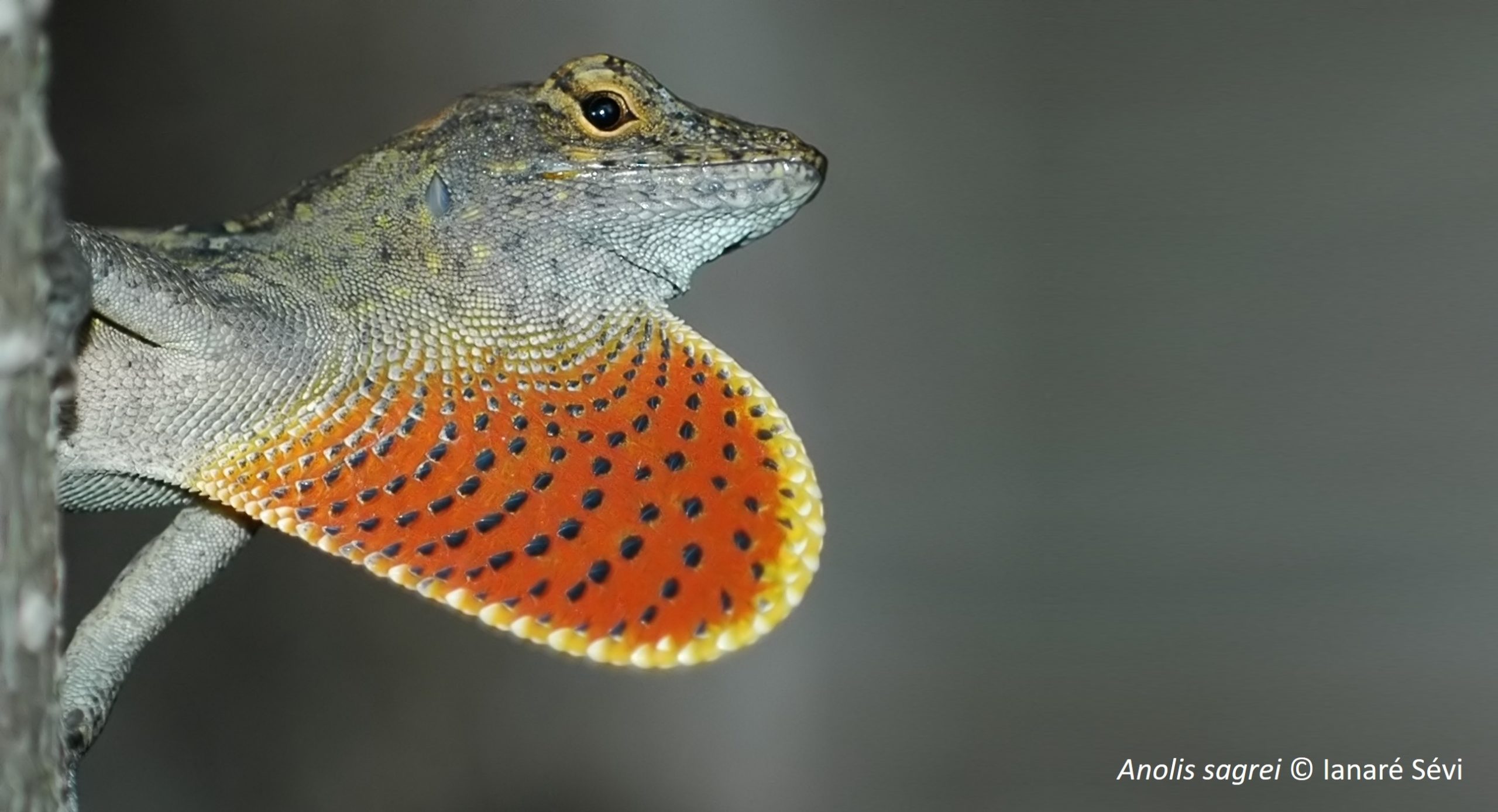 Island of Saint Lucia, November 2021. Among the branches, a furtive movement betrays the fear of a lizard that has just been spotted, not by a predator, but by a scientist. Over the last few days, a team from the MERCI project, aimed at studying invasive reptiles of the Lesser Antilles, has been on the field for its first major mission. 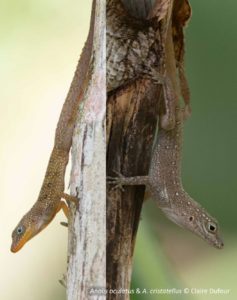 A. oculatus and A. cristatellus, both present in Dominica (Photo © Claire Dufour)

Departing from mainland France, Claire Dufour, Anthony Herrel and Sébastien Motreuil are all scientists with experience in the study and handling of reptiles. They joined the Wildlife and Parks Division (FWPD) in Dominica and the Division of Forest and Lands Resources (DFLR) in Saint Lucia, both government partners that are working with Caribaea Initiative on the MERCI project. This project, supported by the Interreg Caribbean program in respect of the European Regional Development Fund, aims to study invasive reptiles of the Lesser Antilles and their impact on local fauna (learn more about the project). The mission has two objectives: to train these partners in the study of reptiles in the field while collecting the first dataset on the native and invasive lizard species living on the two islands.

Saint Lucia and Dominica are both home to a native anole lizard species (Anolis luciae and A. oculatus, respectively), but are also colonized by several invasive species (A. wattsii, A. extremus and A. sagrei for Saint Lucia, A. cristatellus for Dominica). Species identification, a key part of the training, relies on morphological characteristics (color, size, etc.). It can be tricky however as lizards are sexually dimorphic (males and females are different), and also because of phenotypic variations linked to the presence of several ecomorphs, i.e. morphological characteristics that vary according to the micro-habitat occupied by individuals belonging to the same species. The detection of individuals in the field also needs some practice, especially because of their variable location within the ecosystem (soil, trunk, branches, etc.). One of the aims of the training was thus to reduce the bias of capture in favor of males, that are larger and more colorful than females and therefore more easily spotted. 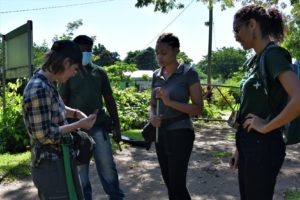 Training in handling lizards in the field

The training session also aimed to ensure a similar methodology between partners from different territories, in order to obtain the homogeneous dataset required for statistical analysis. Various technical points were thus discussed in detail, such as how to locate a study site and describe its environmental characteristics, or how to catch animals, to mark them (number on their belly), to transport them and of course to record the morphological and behavioral data. In total, nine partners in Saint Lucia and four partners in Dominica benefited from the expertise provided during this training.

In terms of raw data, the morphological characteristics of 261 lizards were measured, all species combined. Body temperature was measured in 119 individuals, and data on the ecology of the animals, in particular the characteristics of their micro-habitat (type of perch, height, canopy density, etc.) were collected for 335 lizards. Behavioral data were also collected thanks to a field experiment aimed at understanding the escape behavior of lizards (minimum distance an experimenter can approach and distance traveled during the escape).

Use of a densiometer to estimate canopy coverage

All the data collected needs to be completed and analyzed. In particular, it will be used to better understand the distribution of lizards on each island, to provide information on the morphological, ecological and behavioral characteristics of each of the six species studied, and to verify whether these characteristics vary with the presence of other species. The results will give insight into a possible interspecific competition, and will therefore help to better understand the impact of invasive species on native species, with the objective to develop a more efficient management of these invasive exotic species.

This first field mission of the MERCI project is therefore a real success, both in the effectiveness of the training and in the collection of the first data. The second meeting of the steering committee that brought together all of the project partners already discussed about the work accomplished during this mission, as well as the next stages of the project. We will make sure to keep you informed!