Miragoane: the lake of Haiti where fish species flourish

The Caribbean islands are home to a rich and varied endemic flora and fauna. This incredible biological diversity is explained in particular by the process known as “adaptive radiation”, i.e. the appearance of many new species in a limited period of time, due to their adaptation to a varied range of ecological niches. A recent study provides new evidence on this phenomenon.

While a new species of fish of the Limia genus was recently discovered in the Lake Miragoane, in Haiti (Rodriguez-Silva et al., 2020; read our article), this species is far from unique. The lake is actually home to no less than nine known species belonging to this group of fish, while 19 of the 23 existing Limia species are found on the island of Hispaniola alone. The article describing the ninth species of the lake suggested that this profusion of Limia could be explained by a recent radiation of the group, due in particular to ecological specificities. A study published the year later about the feeding strategies of each species (Rodriguez-Silva et al. 2021; read our article) supported this idea, without fully validating the hypothesis.

In a recent study, Spikes and his colleagues (2021) provide new elements on the origin of the diversity of the Limia fish. The researchers conducted the most comprehensive phylogenetic study of this group to date. Out of the 23 species of Limia currently known, 18 species were taken into account in the study, including five species from the Lake Miragoane.

The team of researchers went to the field to capture individuals of 12 species and extract their mitochondrial DNA. They chose to compare the genetic sequences of the cytochrome b gene, a particularly useful marker for determining genetic relationships between very close species. To these data, the researchers added the sequences of six other species of Limia already known in the literature. Finally, three species of the Poecilia, considered as the sister group of the Limia, were used to have a genetic sample external to the group. 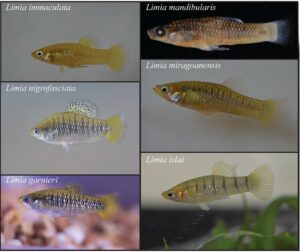 Some of the Limia species found in the Lake Miragoane (Spikes et al. 2021)

The results clearly indicate that the species sampled in Lake Miragoane are all derived from the same ancestral species and therefore form a monophyletic group, which validates the thesis of in situ radiation. Moreover, the genetic analysis of the different individuals within each of these species did not resolve the taxonomic relationships within the group: the species are mixed on the phylogenetic tree, forming what specialists call a “polytomy”. This unresolved phylogenetic tree could be explained by a very recent divergence of these species, which, although morphologically differentiated, are not yet fully distinguishable from each other at the level of the genetic sequence of the cytochrome b used as a marker. Finally, the study confirms a divergent evolution of the Limia fish on the different islands of their geographical distribution (Hispaniola which includes the vast majority of species, Cuba, Jamaica and Grand Cayman).

While it is now certain that the diversity of Limia fish from the Lake Miragoane is indeed the result of a recent radiation event, the mechanisms explaining this radiation are still to be clarified. These fish indeed occupy very similar ecological niches and have similar life history traits. One of the species, however, differs from a morphological point of view, with a different lower jaw reflecting a possible specialization in diet (Rodriguez-Silva et al. 2021). All species also show a marked sexual dimorphism. Natural selection as well as sexual selection could therefore both have played a role in the radiation of the Limia from Lake Miragoane.

The Lake Miragoane thus once again show its extraordinary biodiversity, while offering a rare opportunity to study the phenomenon of adaptive radiation in the field. Indeed, the phenomenon remains poorly documented, with a limited number of examples known to date. The most famous example concerns the radiation of another group of fish, the cichlids, in lakes of the Rift Valley of East Africa. While other recent studies highlight the importance of Lake Miragoane in terms of a reservoir of biodiversity, including for other groups such as birds (Saint-Louis et al. 2021, read our article), the emergency of protecting this freshwater lake, one of the largest in the insular Caribbean, is once again confirmed.